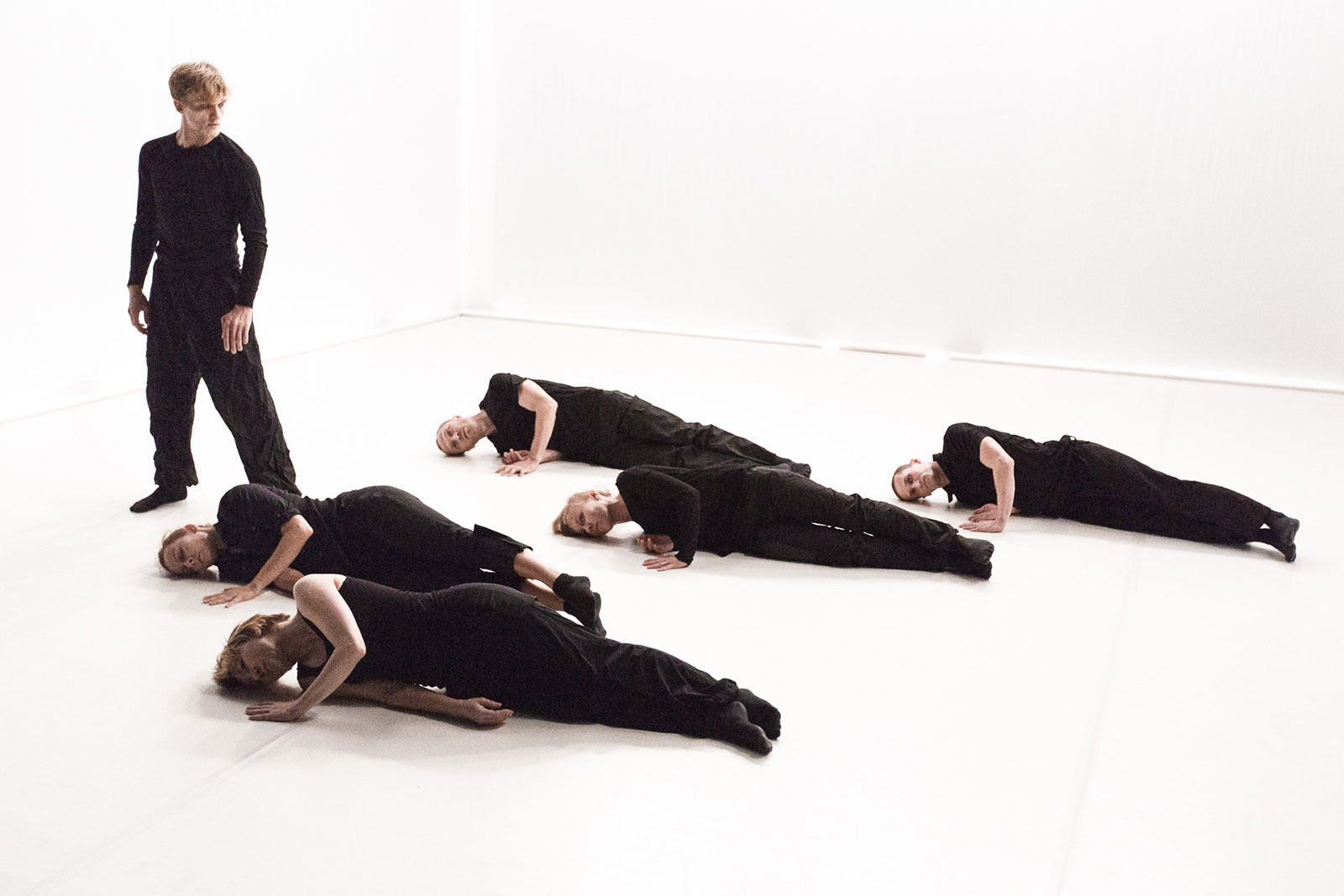 Performance “Stalking Paradise” was realized in cooperation with the Institute of Music and Dance under the program Orders choreographic 2014.

Let them be helpless like children because weakness is a great thing, and strength is nothing. When a man is just born, he is weak and flexible, when he dies, he is hard and insensitive. When a tree is growing, it is tender and pliant, but when it’s dry and hard, it dies. Hardness and strength are death’s companions. Pliancy and weakness are expressions of the freshness of being. Because what has hardened will never win. / “Stalker”, Tarkovsky /
Would you really want your deepest longings to come true?

In “Stalking Paradise”, the Estonian-Norwegian choreographer duo Roosna & Flak investigate the difficulties of belief together with the dancers of Lublin Dance Theatre and Physical Studio. What do we believe? Why do we believe what we do? How hard is it really for different beliefs to coexist?

In the performance, different elements of faith are explored and questioned through movement, sounds and texts: dogmatism, flow, change, stability, adaptability. On which basis do we make our decisions? Do we act to satisfy the group norm, or do we act from a genuine individual conviction? How can we know the difference between the two—is there even a fundamental difference?

Award-winning choreographers and dancers Külli Roosna (Estonia) and Kenneth Flak (Norway) have been collaborating since 2008. Whether creating choreographies or their own dancing for others, their work deals with the narratives and technologies of the body. They have explored a wide range of themes, including ancient Viking mythology, contemporary internet culture and totalitarian regimes. The core of their work is the dancing body's possibilities and limitations, in a constant dialogue with the digital technologies and discourses that extend and counterpoint it. In addition, in the freelance field, they have been commissioned to create works for the Estonian National Ballet, Festival Classique (The Netherlands), Kaunas Biennial (Lithuania) and others.

Lublin Dance Theatre is running an artistic, organizational and educational activities in Centre for Culture in Lublin since 2001 combining all those forms of activities. It was established by Hanna Strzemiecka, for many years its main choreographer and artistic director of the company, alongside with Anna Żak, Ryszard Kalinowski and Wojciech Kaproń, leaders of the Contemporary Dance Group of Lublin University of Technology, one of the leading contemporary dance companies in Poland during the 90's. With time, team has grown with addition of first Beata Mysiak and later on Anna Kalita and Konrad Kurowski. They comprise a professional contemporary dance hub engaged in many activities and collaborations with cultural institutions in Poland and abroad.

The most important projects realized by LDT are: International Dance Theatre Festival (annually since 1997), educational project “Thought in motion” (since 2011), Motion Center (since 2013) and International Dance Day (since 2014). Lublin Dance Theatre is a partner in the European dance web Aerowaves and in 2014 has organized along with Institute of Music and Dance the Polish Dance Platform. An important part of LDT's mission is its activity as part of the Eastern Partnership, from which has sprung two big programs: “Direction – East, station – dance” (2015) and “Choreographic Territories – Eastern Partnership” (2016). In recent years, LDT has also begun a process of supporting Polish dance makers by giving access to studio spaces of Centre for Culture in Lublin for artistic residencies.

Lublin Dance Theatre’s productions have been shown at many national and international festivals. The shape of the LDT’s performances is built on the individual search process of each member of the theatre, as well as in collaboration with guest artists. Important for LDT’s dancers and choreographers is the individual expression of the dancer and finding what’s unique for each performer’s language of communication. Each of them follows separate and distinctively their own artistic path.